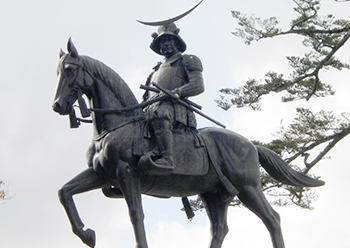 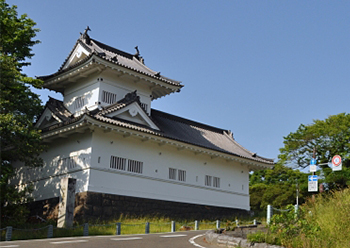 The earliest record of saké making in Miyagi mentions a local liquor shop in Watari Town called Takeda Genzaemon which did its own brewing in 1604. A few years later, in 1608 a saké facility for the Sendai domain was established by Daté Masamune, the founder of the Sendai domain, who enjoyed saké with his meals.

The Kayamori clan mainly served the first to twelfth generations of the Matamon clan in brewing more than 20 types of saké, such as gozen saké (high class saké with roots in Okayama Prefecture), summer ice saké, honeysuckle saké and mulberry saké. It had a great influence on the development and improvement of brewing techniques. As the domain-sponsored saké shop developed, local brewery shops appeared within the castle town of Sendai. As the breweries competed with each other, Miyagi’s saké brewing techniques were further developed and refined.

Daté Masamune, through an introduction by Yagyu Tajimanokami Munenori, summoned a saké maker named Kayanomori Mataemon and 10 assistants living in the Kayanomori area of Nara to make a saké brewery on the south side of the third compound of Aoba (Sendai) Castle,
Masamune expressed his appreciation by honoring Mataemon with 200 bushels of rice. The saké brewery is said to have been directly established by feudal lord Masamune himself.

Saké brewers’ associations were established in various parts of the prefecture after the promulgation of the “Policy of Trade Associations” in 1897. It is said that liquor tax covered most of the war costs of the First Sino-Japanese War of 1894-95 and the Russo-Japanese War of 1904-1905. Since the era of feudal lords, alcohol has been a valuable source of finances, and that idea was inherited in the Meiji era where it contributed greatly to the nation’s finances.

Under the Alcohol Brewing Tax Law of 1891 and a partial revision of 1931, saké brewers’ associations were legally established and under the supervision of the government. The MIYAGI SAKE AND SHOCHU MAKERS ASSOCIATION was established in 1891. Yoshihei Takeda was appointed as the first chairman, and since then the government-established association has carried on to the current 14th generation chairman, Mitsuru Onuma. 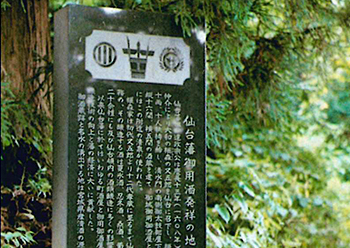 As one of the commemorative projects for the 70th anniversary of establishment in 1980, the MIYAGI SAKE AND SHOCHU MAKERS ASSOCIATION erected a stone monument titled “Birthplace of Sendai Domain Saké” to mark the location where prefectural saké was first made, at the ruins of the first brewery, and famous water gushes out from the ground.

Proclamation of Miyagi as a Junmai Saké Prefecture

In November 1986, members of the MIYAGI SAKE AND SHOCHU MAKERS ASSOCIATION made a promise to increase efforts to “make good and delicious” junmai (“pure rice”) saké created from local Miyagi rice which has a reputation for its delicious taste.

Furthermore, since it was saké-loving Daté Masamune that invited a master brewer to come to Sendai and built a saké brewery inside the Sendai Domain’s castle, with much fanfare it was decided that 10,000 bottles of “Saké Drank By Masamune” be made as a souvenir.

Among the 25 brewing companies in Miyagi, 6 were completely destroyed, 3 suffered heavy damage, and 14 were partially damaged. Due to the extensive destruction, some brewers were considering to close their businesses.

However, thanks to the generous support of Miyagi Prefecture, the National Taxation Bureau, organizations related to the national government, and saké fans, not one company was lost to the disaster, with all rebuilding and continuing production today. We are very grateful to everyone for their help.

It has been 30 years since the declaration of “Miyagi as a Junmai Saké Prefecture” announced on November 1, 1986. Together with delicious Miyagi rice, this declaration caused great excitement in the brewing industry nationwide, and the previously unknown junmai saké now accounts for half of all the saké produced in Miyagi.

In addition, due to the diligence of brewers to apply their skill and encourage each other, high quality and delicious Miyagi Junmai Saké has been loved by many saké fans. We would like to extend our deep gratitude to all of you for your continued support.

On the other hand, in recent years, junmai saké brewed with high quality and individuality has become popular nationwide. At the same time, delicious rice varieties and rice suitable for saké brewing have been developed one after another, and the overall influence of the region as a saké producer is increasing.

As we mark the 30th anniversary of “Miyagi as a Junmai Saké Prefecture,” we promise that we will continue to devote ourselves to making the best junmai saké from the best Miyagi rice with the cooperation of our many supporters.

Craft and Passion of the Nanbu Toji Guild

Currently, most of the active master brewers in Miyagi Prefecture are “Nanbu Toji,” members of the Nanbu Guild of Master Saké Makers. The Nanbu Toji, who have a history of more than 350 years since first establishing in the feudal era, is one of Japan’s top three saké brewing guilds, along with Echigo Toji (Niigata Prefecture) and Tanba Toji (Hyogo Prefecture). The work of Nanbu Toji is not limited to Tohoku, but can be found throughout Japan, except for San’in (southwest Honshu) and Kyushu. The high reputation of the Nanbu Toji is due to their advanced skill and proven techniques.

Nanbu Toji saké brewing, which originated in Tohoku, is characterized by a “clean crispy dryness.” The low-temperature long-term fermentation technique and technology suited for the harsh winters of Tohoku produce a clean and dry sake, which has now become synonymous with the general taste of sake.

For six months from November to April of the following year, the toji’s (master brewer’s) work continues without a break. The toji’s enthusiasm for carefully steaming rice, making koji, preparing the yeast starter, and mixing the mash in a three-stage process slowly manifests from a dream into delicious saké inside the brewery.

90 Percent of Production is Premium Sake

Miyagi Saké is one of the highest quality saké in Japan. Since the “Proclamation of Miyagi as a Junmai Saké Prefecture” in November 1986, the brewers have increased the production ratio of high-quality “tokutei meishō sake,” (premium sake) that is saké in which it is obligatory to display the ingredients and the rice polishing rate. Currently, about 90% of Miyagi’s saké is classified as premium sake, far exceeding the national average of about 30% and the average in the Tohoku region of about 50%.

At the Annual Japan Saké Awards co-sponsored by the National Research Institute of Brewing and the Japan Saké and Shochu Makers Association, the Gold Prize award rate for saké submitted from Miyagi Prefecture was the highest in Japan for 3 consecutive years from 2016 to 2018.

The number of prizes received, including Gold Prizes, was 18 out of 23, which is actually 78%, the highest in Japan. That is why some people say: “No matter what saké you drink in Miyagi, you can’t go wrong.”

“SAKE” Captures the Attention of the World

The “Annual Japan Saké Awards” held since 2001 and “The Joy of Sake” event, which promotes the award-winning sake, are very successful every year. The International Wine Challenge (IWC), one of the world’s largest wine contests, created a saké section in 2007, rising the recognition and reputation of saké worldwide. Miyagi Saké has also won awards from early on in the contest, and expectations are high for further progress.

The Support of Passionate Supporters

Miyagi Saké is supported by many enthusiastic fans, including members of the “Saké Supporters Club” who gather with other saké lovers to join in tasting sessions and events. All the while, the circle of people who love Miyagi Saké is steadily widening.